Politics for the People (Book Club)

The Politics for the People Book Club (P4P)

Was established in 2012 as an innovative online book club by Cathy Stewart and Independent Voting. Since then it has grown to 354 members nationwide.  The book club explores history and politics from an independent nonpartisan point of view; reading fiction, history, poetry, and current affairs. Club members read each selection together over 6-8 weeks and have the opportunity to engage in a lively conversation in the Readers’ Forum on the P4P blog.  In addition, the blog provides members with reviews, author interviews, and videos to enrich the reading experience. Each book club selection culminates in a lively conference call with the author where members get to speak directly with them and create a thought provoking conversation. Politics for the People enjoy a reputation among authors for conversations about their books that have depth and scope.

Cathy Stewart, who has joined  The People as National Field Director commented, “I am excited to be bringing Politics for the People to The People as part of the ongoing collaboration between Independent Voting and The People. I hope people will join me in reading our new selection and sharing their thoughts”

Check Back in November for the Next Selection

From two former military officers and award-winning authors, a chillingly authentic geopolitical thriller that imagines a naval clash between the US and China in the South China Sea in 2034—and the path from there to a nightmarish global conflagration.

In The Balance of Powerwith Author Omar H. Ali

Originally published in 2008, Omar H. Ali’s groundbreaking study reveals the multiple independent political strategies and tactics that African Americans have used to expand democracy and to fight for civil and political rights since the founding of the nation.

This new edition of Ali’s groundbreaking narrative includes an epilogue by independent political analyst and leader Jacqueline Salit. New material addresses the historic presidencies of both Barack Obama and Donald Trump, as well as the rising tide of independent and anti-party sentiments.

Omar H. Ali is dean of Lloyd International Honors College and professor of global and comparative African diaspora history at the University of North Carolina, Greensboro. A graduate of the London School of Economics, he received his Ph.D. in history from Columbia University and was named the Carnegie Foundation North Carolina professor of the year.

Some comments about the book:

“One of the many virtues of Omar Ali’s account lies in highlighting the variety of political structures and strategies blacks have chosen over the course of American history in pursuing the goal of racial justice. Independent politics… has a long history, which, as Ali shows, has at many points energized the black community and helped to make America a better place for all its people.”

Eric Foner, from the foreword

“Captures the most important nuances of the ways that African Americans have fought for their own political and economic interests.”

The Politics Industry:
How Political Innovation Can Break Partisan gridlock
and Save Our DemocracyBy Katherine M. Gehl and Michael E. Porter

Utilizing a business analysis lens and Michael Porter’s Five Forces Framework, the authors examine our current political system. In the introduction, the authors lay out the questions the book hopes to answer:

Why is the United States innovative in so many areas, but not in politics?

Why is it normal to have limited — and often disappointing — choices at the ballot box?

Why doesn’t Washington, D.C., get anything done?

Why does an independent candidate rarely stand a chance of getting elected?

What outcomes should we expect from an optimally functioning political system?

And, most importantly, what can we do to start achieving those great outcomes?

Join the Politics for the People network today at politics4thepeople.com/. Grab your copy of Politics Industry and as you are reading, check out what members are writing on the blog. You can join the book club by visiting the blog and signing up to get regular updates. 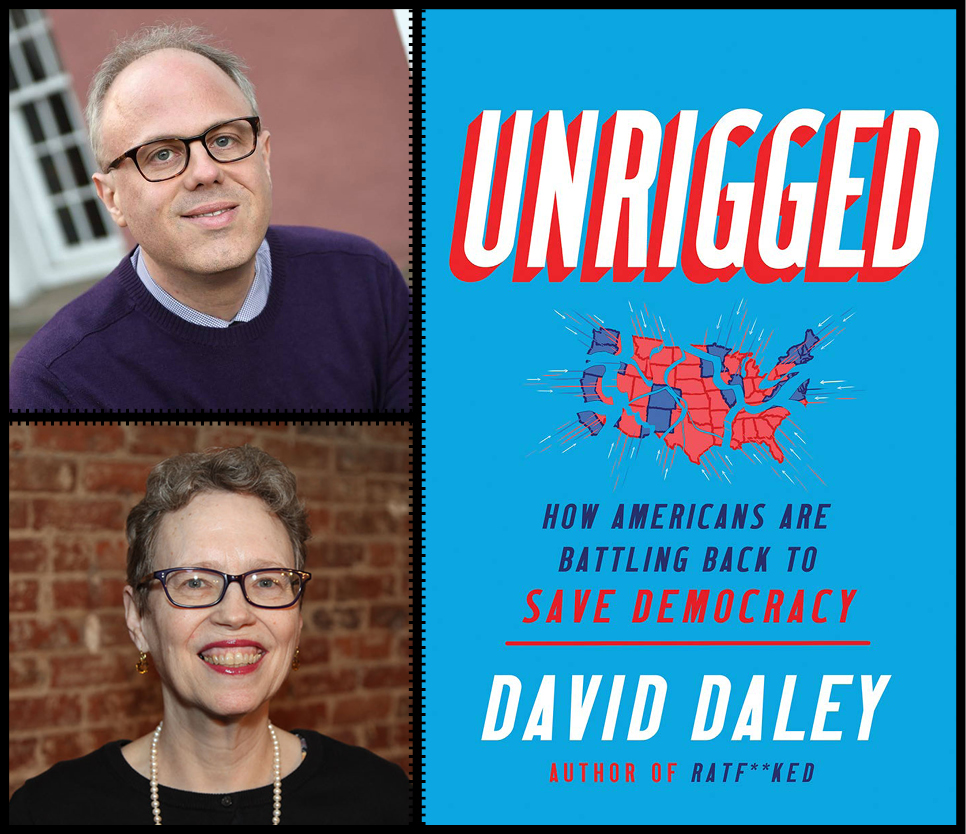 UNRIGGED: How Americans Are Battling Back to Save DemocracyBy David Daley

The spring selection is UNRIGGED: How Americans Are Battling Back to Save Democracy by David Daley. The book is a vibrant topography of the growing movement for political reform.  David takes us to the key battlefronts that emerged in 2018 from Maine to Florida; from Michigan to Utah.  Daley devotes a chapter of the book to The People’s Executive Director, Katie Fahey and the extraordinary story of her work to create Voters Not Politicians from a Facebook post to a volunteer army of over 14,000 Michangers to successfully put a ballot initiative before the voters to end partisan gerrymandering and create a citizens redistricting commission, winning with 61% of the vote.

Dave Daley joined Politics for the People for a rich conversation about the book and the ongoing movement for reforms to put more power in the hands of ordinary Americans.  You can join the book club by visiting the blog and signing up to get regular updates.